Dramatic church growth has taken place in this region as the Holy Spirit ignites a passion for the lost among believers.

The Assemblies of God in Latin America and the Caribbean is growing despite political uncertainty, economic instability and social unrest. Researchers refer to the expansion among Pentecostal churches as “the most successful social movement of the past century.” The growth is attributed to the absolute priority of emphasizing the person and work of the Holy Spirit. Whatever is accomplished is a result of God’s power and might. As a result of the Azusa Street outpouring, fervent Pentecostal missionaries began establishing churches in Argentina, Brazil and Chile.These fellowships grew through door-to-door witnessing, evangelism crusades and church planting. New believers often suffered ridicule and were ostracized, and missionaries were sometimes forced to flee to other locations. But the church continued to grow. Rapid church growth and church planting efforts intensified as verifiable miracles influenced people to attend mass evangelism events where thousands committed their lives to Christ. Media outreaches also played a significant role in spreading the gospel. Missionaries to Latin America are now partnering with national church leaders to embrace the challenge of reaching the region’s indigenous people groups. Together they are teaching national believers to be missionaries to their own people. Expectations are high as God continues to bring opportunities for ministry and change lives through the power of the gospel.

A popular tourist destination, the Bahamas had an established Assemblies of God fellowship with several growing churches and a thriving Bible school.

In the Atlantic, just south of Florida, lies the beautiful Bahamas—a chain of islands known for tourism, banking and e-commerce. Though nearly 3,000 coral islands and reefs make up the Bahamas, only about 30 are inhabited. The majority of the population lives on the islands of New Providence and Grand Bahama. Tourism is the base of the economy due to the beauty and warm climate of the islands. Although the Bahamas' weather is mild, the islands are often buffeted by hurricanes during the fall and winter months. Most of the islands are limestone strips covered by rocky, rough soil. The majority of the country’s food must be imported. Several Protestant groups are represented in the Bahamas, including Baptists, Methodists and the Church of God. About 20 percent of the population also claims to be Catholic. The Assemblies of God in the Bahamas has its roots in the Azusa Street revival in the early 1900s. Pentecostals from the United States traveled to the islands to evangelize and plant churches. The Assemblies of God fellowship in the Bahamas also includes the neighboring islands of Turks and Caicos. A Bible college is preparing students for service, both in the Bahamas and to other areas.

Access to Shuar villages is difficult, but efforts to share the gospel among them are bearing fruit.

The Shuar live in the southeast corner of Ecuador’s Amazon jungle. A once nomadic people group, they have since settled in small communities. About 110,000 Shuar live in an area that is mostly dense jungle and accessible only by canoe or on foot. They once were known as headshrinkers, but that practice has been outlawed for more than 50 years. Traditionally, men hunted and wove clothing, and women gardened and cared for the children. Contact with outsiders caused adaptations in some aspects of their lifestyle, but the Shuar live largely the same as they have for centuries. An animist people group, the Shuar do not believe in death by unexplained illness. Instead, they believe in tsentsak, or invisible darts. These darts are controlled by shamen known as “uwishin.” Enemies can hire uwishin to shoot tsentsak at people they seek to harm. A missionary couple leads an outreach among the Shuar and a growing gospel outreach has been established. Ministries include churches, a Bible school, water projects and a home for at-risk Shuar girls. However, the remoteness of Shuar villages and the time needed to develop long-term relationships with the people continue to be obstacles to the spread of the gospel.

Pray for the Bible schools of West Africa. Most of them have had to close early this year due to COVID-19. They are to church growth what the lungs are to the body. They equip pastors who are desperately needed to continue to bring in the harvest until Jesus comes. In Africa, we always say, "Biblically trained, Spirit-empowered workers are Africa’s hope.” Pray the schools will be able to reopen this fall. Most of our schools and students have no way to study online, so we need the schools to reopen to continue to train this great workforce.

Iris has had the opportunity to lead her ladies’ groups via Zoom during this COVID confinement. She just started a conversational English outreach to women in Indonesia, China and Japan; and has been leading her other group of ladies through the Book of Acts. Pray for continued open doors to ministry.
— Jhan and Iris Hurst, AGWM missionaries to Asia Pacific

Founded in 1744, Oman is the oldest independent state in the Arab World. ​It is known for it shipbuilders and breeders of Arabian Horses. ​Oman is famous for its mouthwatering dates and coffee.​ Let’s pray for this country that has spent the last 276 years independent from their reliance on God. ​Pray for those God has called and is calling to Oman. ​Pray they will be have a continued presence in the country and the people’s hearts would be open. May the Omani people know the everlasting water that will leave them spiritually satisfied.

Millions of poor Roma in Central and Southeastern Europe, most of whom live in cramped conditions without access to health care and basic sanitation, are facing a humanitarian disaster. Those who already earn a meager living by collecting junk and plastic or selling food, household products and flowers are currently unable to carry out even this informal work within COVID restrictions. Please pray for the Roma communities in the eastern parts of Europe.
— Jim Sabella, AGWM Southeast Europe area director

Vienna Christian Center has been streaming youth ministry services through YouTube and Facebook. Please pray for AG international churches, and other AG community churches, that these types of outreach will continue to reach a wider audience of young people grappling with spiritual questions.

As you pray for the safety of AGWM missionaries around the world, consider this praise report:
Thank you to all who pray for us! On a recent trip before quarantine, Tim was driving with a car full of people and the tire fell off when the ball joints were too tired to go on! It could have happened so many places but it was best-case scenario, and two of the guys in the car were able to work together to fix it so that Tim could make the six-hour drive home.
— Tim and Nicole Strange, AGWM missionaries to Costa Rica

The Yi are isolated geographically by mountain ranges and separated by six major language dialects. Pray for a Bible to be made available in their language, and for God to call those who would go and minister to these remote people. 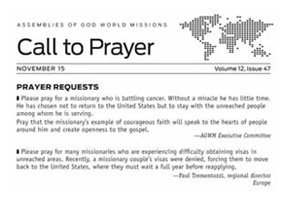 Prayer requests and praise reports are sent each Wednesday by email.

Please select your purpose in subscribing to Call to Prayer:

Fill in the form below to receive Call to Prayer weekly emails for your church.

Fill in the form below to receive Call to Prayer weekly emails for individual use. 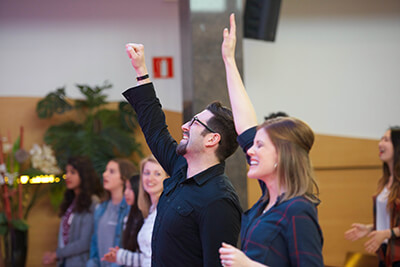 A monthly PDF listing names of missionaries on their birthdays.

This downloadable document does not name any missionaries involved in sensitive ministries. 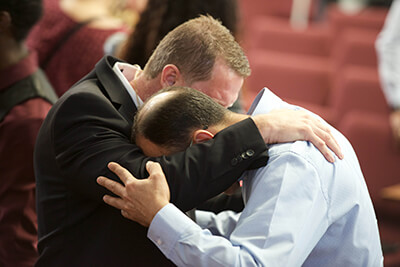 PrayerNet was established to provide daily contact via email with intercessors for urgent missionary needs.

Missionary birthdays and anniversaries and missionary kids' birthdays are also included as points of prayer.