A Message in the Marketplace

A Stranger at the Door

Escape Into the Night 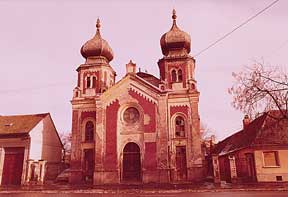 I flew from Brussels, Belgium, to Belgrade, Yugoslavia (now Serbia), with no qualms. When I landed, the pastor of a large, thriving church in Subotica would be there to meet me. What was there to worry about?

When the plane landed, I went through the customary passport control and into the passenger area where I was to meet the pastor. But he was not there. At first I was not surprised, thinking he might be a bit late driving in from Subotica. But after waiting a half hour, I began to wonder where he could be.

What I did not know was that the pastor had already been to the airport and was told I had not arrived. He made the 118-mile journey back to Subotica, wondering where his guest preacher and conference speaker could be.

While the pastor was returning home without me, I was waiting for him at the airport with mounting anxiety. Friends had urged me not to make the trip, but I felt it was the Lord’s will. Now I was in an unfamiliar country, I could not speak the language, and I needed to be in Subotica by 8:30 the next morning.

I decided I could at least get on the bus that would take me to the city station. But at the terminal, I was amazed and dismayed at the crowd of people and the dozens of buses coming and going. What should I do now? I wondered.

And then it happened! As I left the bus, my attention was drawn to one man. His appearance was no different from the other people. Yet he was looking at me and smiling.

The man motioned for me to follow him. With no better plan, I complied, making sure not to lose him. The man led me through the crowd into the terminal building where I was faced with a long line of ticket windows. Eventually he stopped at one particular window and spoke to an agent who gave him a ticket. Handing the ticket to me, he motioned again for me to follow him.

Through a door I saw buses coming and going. Once more the man motioned to me to wait at a particular empty stall. I knew by then the bus would take me to Subotica. I offered the man money but he refused. Then he left.

I waited. After 20 minutes I became uneasy again. Then, through the crowd I saw the man’s smiling face again. He motioned for me to continue waiting and then disappeared once more.

At that moment, the bus pulled into the parking space. I got on, showed the conductor my ticket, and found a seat. That night I slept peacefully in a hotel close to the bus stop in Subotica. Early the next morning, the pastor came by to see if, by chance, I had arrived.

God made a way for me where there was no way. He even used an angel in Yugoslavia to help me in my time of need.

Melvin and Eleanor Jorgenson served as missionaries for 50 years.

A Message in the Marketplace 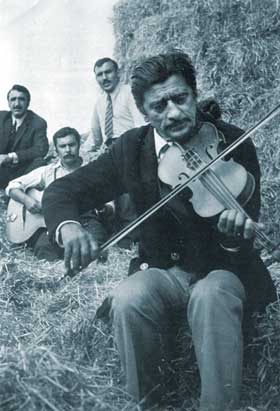 On a cold January day, Madame Reinhard was buying supplies at the marketplace in Lisieux, France, when a man approached her and handed her a gospel tract.

“God still heals the sick,” the man told her.

The Gypsy woman took the tract, carefully folded it, and put it in her purse. It remained there as she and her caravan traveled on its seemingly endless journey from place to place. Several times it fell from Madame Reinhard’s purse, but each time the woman faithfully retrieved it. She felt constrained to keep it, even though she could not read the words printed on it.

A few months later the Gypsy caravan returned to Lisieux. This time one of Madame Reinhard’s sons was very ill. The concerned mother sought medical help for the boy, but a diagnosis of appendicitis and peritonitis brought little optimism for recovery.

“There is no hope for him as far as human science is concerned,” doctors told the family.

In her despair, Madame Reinhard remembered the man with the tract and his brief statement to her. Drawing the leaflet from her purse, she asked a woman at the hospital to read it aloud, including the name of the church printed on it.

After learning where the AG church was located, Madame Reinhard set out to find it.

She arrived while a Sunday morning service was in progress. Interrupting the pastor, she cried out, “Sir, my son is dying. Come and pray for him.”

“Your son will not die. God is all-powerful,” the pastor replied. “He is able to heal and deliver.”

The pastor went with Madame Reinhard to the hospital and prayed for her son. In only a few days the boy was released with no signs of illness.

News of the miracle spread. When Madame Reinhard’s married son, Mandz, heard what had happened, he rushed to Lisieux to see the evidence for himself. Convinced of the power of God, he wholeheartedly received Christ.

Within a few days, the caravan resumed its travels. Although the Reinhard family’s knowledge of the Bible was limited, they continued to serve Christ faithfully. In Gypsy camps where they stopped, they testified of the wonderful God who saves and heals.

About two years after the miracle, 30 Gypsy believers assembled at a prayer meeting in Brest, France. The presence of God was evident among them, and several, including Mandz, were filled with the Holy Spirit. This outpouring sparked revival fires that eventually spread across several countries.

From a simple gospel tract, God opened doors for the gospel among the Gypsies of Western Europe. With eyes of faith, Madame Reinhard, the woman who couldn’t read, led the way.

A Stranger at the Door 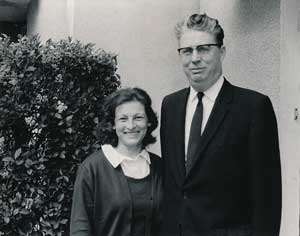 “I need money to buy food.”

Sadly, Kenneth Ware looked down into the dark eyes of his wife, Suzy.

“I have no money to give you,” he answered.

That Saturday morning, war was fiercely raging throughout France. Jewish people were being snatched by Adolph Hitler’s Nazis and carried off to concentration camps or exterminated in gas chambers in Poland and Germany.

Kenneth had been rescuing Jews from their tormentors and helping them cross the French border to safety in Switzerland and Spain. As a result, he was blacklisted by Nazi insurgents.

Through a series of miracles he escaped France with Suzy and their baby son, Edmond, and fled to Switzerland. In Lausanne, they found an apartment in which to live, but money was scarce. That morning Kenneth had nothing to give his wife for food.

“Jesus,” she said with childlike simplicity, “I need 5 pounds of potatoes and 2 pounds of pastry flour.” She named the brand of flour she wanted before adding, “I also need apples, pears, a cauliflower, carrots, veal cutlets for Saturday, and beef for Sunday. Thank You, Jesus.”

At 11:30 that morning, Suzy answered a rap on the Wares’ apartment door. There stood a man with a basket of groceries.

“If I should ever see that man again,” Kenneth said later, “I would recognize Him. He was between 30 and 40 years of age, a little more than 6 feet tall, with very light hair and blue eyes. He was strong, with a radiant countenance. Over his work clothes he wore a long blue apron as was customary for someone delivering groceries. His voice was sweet and low.”

“Mrs. Ware,” the man said in beautiful French, “here are the things you asked for.”

“There must be some mistake,” Suzy answered. “I didn’t order anything.”

“Sir,” Kenneth added, “perhaps these items are for someone else. There are 25 apartments here.”

“Mrs. Ware,” the man repeated firmly, “here are the things you asked for.”

As he emptied the basket, the man placed on the table everything on Suzy’s list. The pastry flour was the very brand she had requested in her prayer.

Suzy went with the man to the door. Kenneth stood beside the window past which the man had to walk to leave the building. But although Kenneth watched for His passing, and Suzy again opened the door to look into the passageway, the stranger disappeared without a trace.

A sense of holy awe fell upon the Wares as they realized what had happened. God had sent His personal messenger to answer Suzy’s prayer.

Kenneth Ware (1917-2005) was born in the United States but grew up in Switzerland. He and Suzy were missionaries to Europe until 1989.

Escape Into the Night 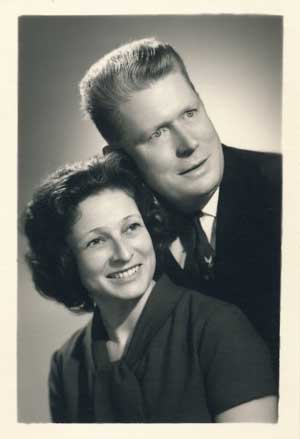 The year was 1942, and World War II was raging in Europe. Kenneth Ware, a young Pentecostal minister, was working with the French Resistance in southern France and assisting Jews fleeing the Holocaust.

By the summer of 1943, Kenneth learned that he and his wife, Suzy, were on the Nazis’ wanted list.

As inconspicuously as possible, on Christmas Eve 1943, the Wares boarded a train for the Swiss border. Kenneth placed his wife and son in one coach, and he went to another. The young couple agreed that if they were separated en route, they would meet at a hotel in Lausanne, Switzerland.

Informers spotted Kenneth, and Nazi intelligence agents halted the train at the border. They took Kenneth to a detention center; Suzy and the baby were not arrested and traveled on to Switzerland.

Kenneth had little hope of release. He was known to have aided Jews and was suspected of giving shelter and assistance to the French Resistance.

Handcuffed, Kenneth stood before a panel of German officers for questioning. The process was totally one-sided, with the officers both asking and answering the questions. Each time Kenneth tried to comment, a burly guard knocked him to the floor and brutally beat him. Kenneth realized they had already made up their minds that he was to be executed the next day.

The guard led Kenneth down a corridor toward a lighted courtyard where a police vehicle waited. As they walked, the guard again knocked Kenneth to the floor and then grabbed his coat lapels to pick him up. In doing so, he felt a lump inside Kenneth’s coat—the hiding place for Kenneth’s New Testament.

The guard tore the little book out of Kenneth’s pocket. He stared as its pages fell open, and his hand began shaking.

Kenneth, his face still stinging where the guard’s fist had hit him, replied, “Yes, I am.”

The guard said, “Tomorrow morning…” and pointed at his rifle. Kenneth knew that meant he would be shot. The guard added that Kenneth was a fool.

Then a miracle happened. Suddenly the guard’s demeanor changed. He replaced the New Testament in Kenneth’s coat pocket and quickly led him down a darkened, unused corridor that escaped surveillance. Reaching a door, he unlocked Kenneth’s handcuffs.

“Now you are being foolish,” Kenneth said to him. “In the morning when they find I have escaped, you will be court-martialed.”

The guard opened the door.

“Out!” he muttered. “Beat it!” Then he pushed Kenneth into the dark night.

Eventually Kenneth made it to Switzerland where he was reunited with his family. In the face of certain death, God made a way of escape.

After the war, the Wares returned to France and ministered there until their retirement in 1989.